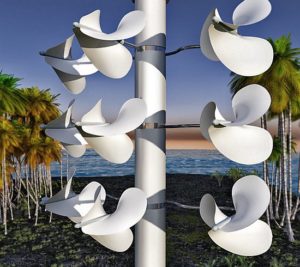 Scalable wind turbine is safe for birds too

We all know that conventional horizontal axis wind turbines aren’t particularly loved by birds as the swiftly spinning blades such them in and you know what happens next. Michigan-based Unified Energies International has tried to make wind energy generation bird and human friendly with their innovative new turbine design called the Windstrument. Being claimed as quiet, powerful, bird-safe and above all scalable, makes the turbine an attractive proposition for the world to adopt.

Being scalable, the Windstrument can be installed easily on the rooftop with just a single or a couple spinning conical helicoids, which are inspired by the shape of racing sails. Capable of sustaining their shape and functionality even in fierce winds, the Windstrument can also be fitted with additional turbines on the same pole to generate power for a neighborhood or an industrial complex, creating a configuration referred to as Windorchard by the company.

The tests have proved what the company claims as during two years of testing in a wetland heavily populated by birds, not even a single bird was harmed. The company is now looking to quadruple its current production capability from the current figure of “several thousand a month”.